Get the Max with Minium: ODU Field Hockey coach says Recent Brush with Death 'Was the Best Thing That Ever Happened to me'

NORFOLK, Va. -- It was a snowy day in January, so Old Dominion field hockey coach Andrew Griffiths and his wife, Tara, decided to have some fun. They took their young boys, Aidan and Owen, sledding at a golf course near their Chesapeake home.

While he watched his kids romping through the snow, Griffiths began to feel ill. Eventually, he got so sick that he stumbled back to the car. Tara decided to cut short the play day and drive home.

A physical therapist, Tara checked her husband’s blood pressure and heart rate at the house and found they were off the scale. She rushed the kids to a friend’s house, then began to drive her husband to Sentara Norfolk General.

They never made it.

“I told Tara, ‘You’ve got to get me to the closest hospital,’” Griffiths said. “I could feel something going on.”

Then he passed out.

He doesn’t remember anything else until he woke up at Chesapeake Regional Medical Center.

It turned out to be a grand mal seizure, which in rare instances can be fatal. Ahead was a week-long hospital stay and six months of recovery that was often frustrating because it involved waiting for his brain to heal.

The brain isn’t like an injured muscle that can be strengthened with exercise. Only time could repair his noggin.

He couldn’t drive for six months and really didn’t get back to coaching full time until the summer.

Yet Griffiths calls the seizure “the best thing that ever happened to me.”

In part, he credits the seizure for his team’s 7-0 record and No. 11 national ranking, which will be tested at 5 p.m. Friday when the Monarchs host No. 2 UConn, the defending national champion.

This has been a breakthrough season for Griffiths, who took over for a living legend when he succeeded Beth Anders in 2013. Anders was the Mike Krzyzewski of field hockey. In 29 seasons, she won an NCAA-record nine national championships and 546 games.

Griffiths won a Big East title and his team lost in the first round of the NCAA tournament in his first season. But the Monarchs had losing records three of the last four seasons.

It took a while, but Griffiths has recast the program in his image. He has a talented and experienced team with three outstanding goalkeepers. He surmises one of the reasons for ODU’s success this season is because he had to relinquish some control.

Assistant coaches Natalie Holder and Julie Petropulos took over while he stayed at home for a couple of months. And now that he’s returned full-time, he’s more laid back.

“I approached this season with a lot of appreciation for our players, with a lot of love for what I’m doing, for the players and coaches around me.

“To coach with love is one of the most basic things you can do.”

The seizure did more than change his coaching style – it changed his outlook on life. He appreciates every day, and his wife and kids, more than he did before.

“It’s crazy how you can take life for granted,” he said. “It’s so easy to look past the good things all around you because you’re so worried about the problems of everyday life.

“As difficult as it was, it made me have a greater appreciation for everything I have.

“That’s the most important thing in life, the people around you, your family. You want to be able to give your best to everyone important in your life.” 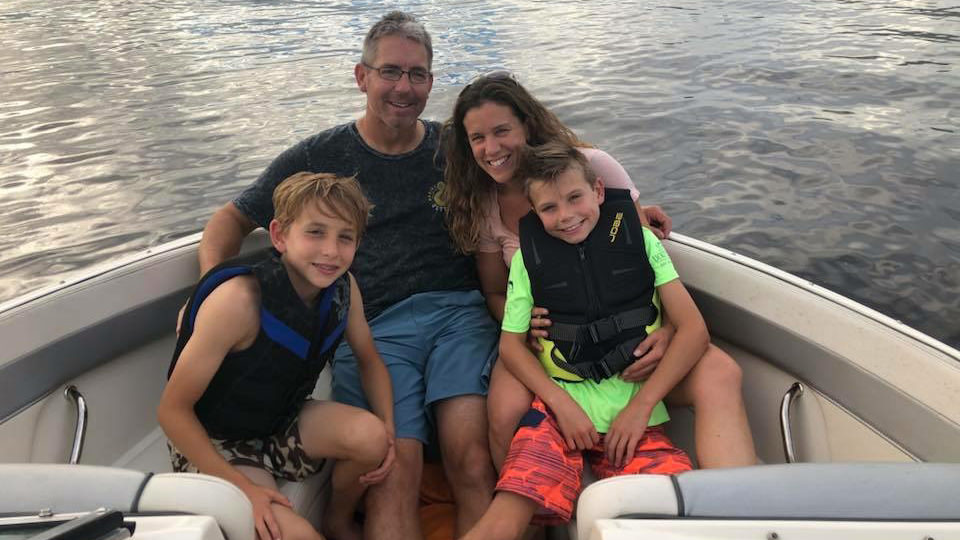 Griffiths with his wife, Tara, and his sons Aidan, left, and Owen, right.

Griffiths was eager to get back to coaching and tried to come back a little too soon. He had memory issues and realized he had to step back. He had to rely on Holder and Petropulus to basically run the team through spring workouts.

“I was anxious to come back but wasn’t feeling quite right,” Griffiths said. “Natalie and Julie were so phenomenal with the team.”

It was a scary and challenging time. Part of the problem was getting his anti-seizure meds figured out. He also realized that he had to back off to give his brain time to heal. He wondered whether another seizure was coming.

His driver’s license was suspended for six months – which is mandatory under Virginia law after a seizure.

He sometimes biked from Chesapeake to ODU, heading through the South Norfolk area of Chesapeake past Norfolk State. When he had an appointment on campus, he had to walk.

Biking and walking gave something Griffiths didn’t seem to have time for before his seizure – a chance to reflect on life.

“It got me exercising a bit,” he said. “And just having time to think is something most of us don’t do. It was good for me.

“It’s a challenging thing to deal with your memory, with your mind. Having the confidence to speak in front of a group was something I had to regain.”

He said the father of one of his players had a similar seizure and offered sage advice.

“He told me, ‘Be patient and don’t expect to get right back to normal.’”

When he returned, “we were really ready for him to come back,” said Rebecca Birch, a junior from the United Kingdom who has five goals and an assist.

Birch agrees that Griffiths has stepped back a bit.

“He’s kind of given us a chance to be more self-reliant,” she said. “He’s given us space to develop. I think that’s helped us.”

Griffiths, a 49-year-old Canadian who was born in England, said in spite of ODU’s unbeaten record, he and his players are humble.

“We know things have gone well, but we’re under no illusions that everything is perfect,” he said. “Every day in practice, we approach things we like did in preseason practice. We’re pushing to get better.

“UConn is going to be quite a challenge. They won the national championship last season, and I think they’re playing better now.”

There’s a bit of uncertainty to Griffiths’ future. Doctors told him that it’s rare for someone to have a seizure during middle age and that they don’t know what caused it. All they can do is treat him with medicine and hope he never has another.

He has to watch his diet, make sure he gets enough sleep and pace himself.

“Coming into the season, I was concerned, because the season has different stresses, with games and game preparation. I’m still really conscious of it,” he said.

“This has been a good lesson for our team. Don’t worry about your ranking. Appreciate the good things you have, the good people around you. Because for them, they’re going to be done in a couple of years and move on in life.

“Tara took such great care of me after it happened. She was so good to me. With young kids the most important thing in the world to me is to get myself right, and not pay attention to things outside of my control.

“I’ve learned to let life’s problems roll off my back.”

Field Hockey Defeated by No. 3 UConn, 2-0 in BIG EAST Finals

Coach Griffiths Looks Ahead to the Conference Tournament